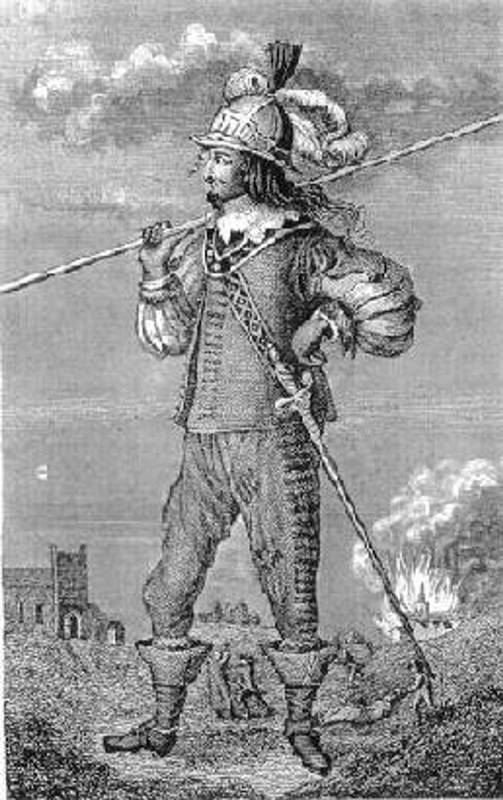 Sir Thomas Lunsford was born in Sussex and gained quite a reputation for himself after being taken to Newgate prison on the charge of attempting to murder his neighbour, Sir Thomas Pelham.  Lunsford escaped the prison in 1637, and was both heavily fined and outlawed.  He fled to France where he raised a regiment and gained experience which was to prove valuable to him during the civil war.
In 1639 at the outbreak of the Bishops' Wars, Lunsford returned and offered his services to King Charles, who pardoned him and remitted his fine.  Lunsford became a firm favourite and gained notoriety as a dashing cavalier.
In 1641 Lunsford was controversially appointed Governor of the Tower of London, and such was the outcry that he was replaced only five days later.  However the King knighted him and Sir Thomas Lunsford was with the King when he attempted to arrest the five members in the House of Commons.
When King Charles left London to raise the Royal Standard against his rebellious Parliament, Lunsford accompanied him.
Lunsford was taken prisoner after the battle of Edgehill in October 1642 and was imprisoned at Warwick Castle until May 1644.  Upon gaining his freedom he once again returned to battle for the King.  He was again captured in December 1645 and the records of the Houses of Parliament dated 22 January 1646 show the following entry:
"Ordered, That the Lord Brudenall, Sir Henry Bedingfield, Sir Walter Blunt, Sir Francis Howard, Sir Thomas Lunsford, and Mr David Jenkins, be committed Prisoners to the Tower of London, for High-Treason, for levying War against the Parliament."

No one seems quite certain if Sir Thomas once again escaped or was released, but in 1648 he left England for Virginia.